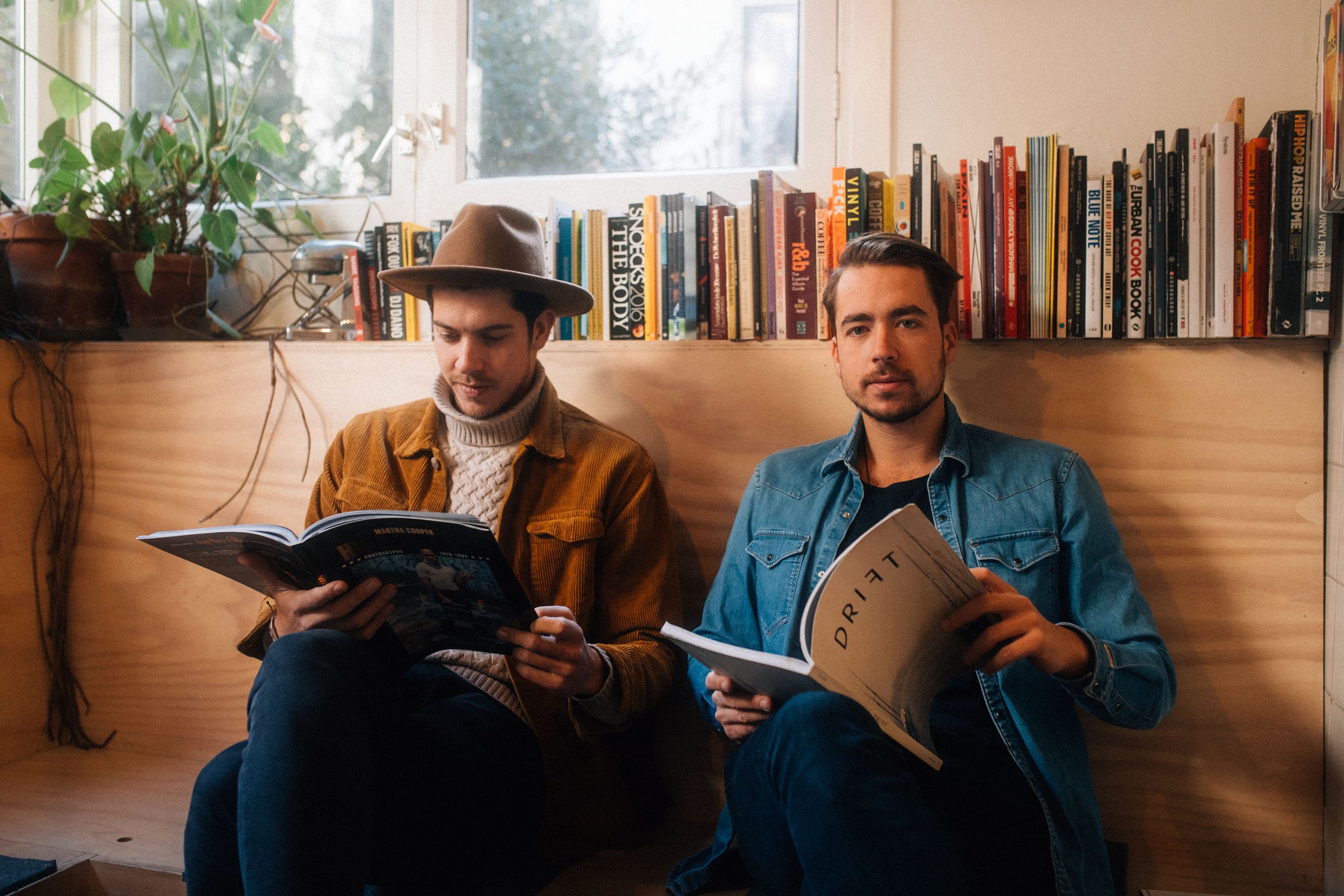 Dance music sounds great in your headphones, but we all know that to truly appreciate it in all its glory that it’s best as a live, shared experience. Two guys who are most definitely acutely of this fact are brotherly duo, Parallells. Indeed, they’ve made an album that’s indicative of the fact. A Day At is a stunning listen… full of enticing music and intriguing sounds, the likes of which you’re unlikely to have thought of as obvious in the dance music domain before. Indeed, the guys bring these unique sensibilities to their own live and DJ duties — so if you ever are going to catch this Dutch duo in the flesh, you can be prepared for the unexpected. With the album having just dropped (we particularly loved early singles such as The Carpenter and The Kitchen), we thought it a good time to catch up with the boys to chat about their own favourite live experiences. Sure, we could have quizzed them on all sorts of things, but this in itself proved to be a fascinating snapshot both intro their guys’ musical career so far, as well as their thought process regarding festivals. Anyway, we’ll let Parallells get on with it now: here are some of their favourite gig experiences of all time…
First Live –  DGTL Festival
We’ve been playing DJ sets for a while, but the live experience as you can imagine has always sparked something different in us. In 2018, we decided to do the jump and propose our first electronic live act in DGTL. They announced us, in the first release of names, 5 months before the show, giving us some time to prepare something completely new. But the more the weeks were passing by, the more stressed we became because we did not expect this amount of work!. From making the tracks to rehearsing to the fine art of sound mixing, we couldn’t wrap our head around it in the beginning. But we work well with time-pressure

It’s the day-D and when we arrived in NDSM before DGTL Festival opened their doors, many thoughts came to the mind: it’s the first time, it’s your moment, will we make mistakes? So many scenarios pops up in your head but the end thought is common for the both of us : We need to make a killer show! First elements are pressed from the MPC, Thomas plays a synth chord that creates a mystical atmosphere, Julien turns on the delay pedal, and the saxophone brings the mystics even further, mic in hand Thomas starts singing along. Familiar faces pop-out of the crowd and then the first kick comes! Badaboum! We feel the smile in the crowd. We usually say “If it begins well, the rest usually flows so naturally just like a timeless wave”. The dome got fuller and fuller and before we knew it, we were closing with a remix of Charles Aznavour, who has a special place in our hearts as it reminds us of our French grandma who taught us how to sing Variété Française.

The whole dome was clapping. Such a disconcerting feeling and a relief. Our close friends, backstage, looked at us with proud eyes. We were still shaking, still floating on another planet, still couldn’t really believe what happened. We hug each other, and hug our friends. Matthew Dekay congratulates us and starts his set. And just like that, we played our first live set in DGTL Festival! 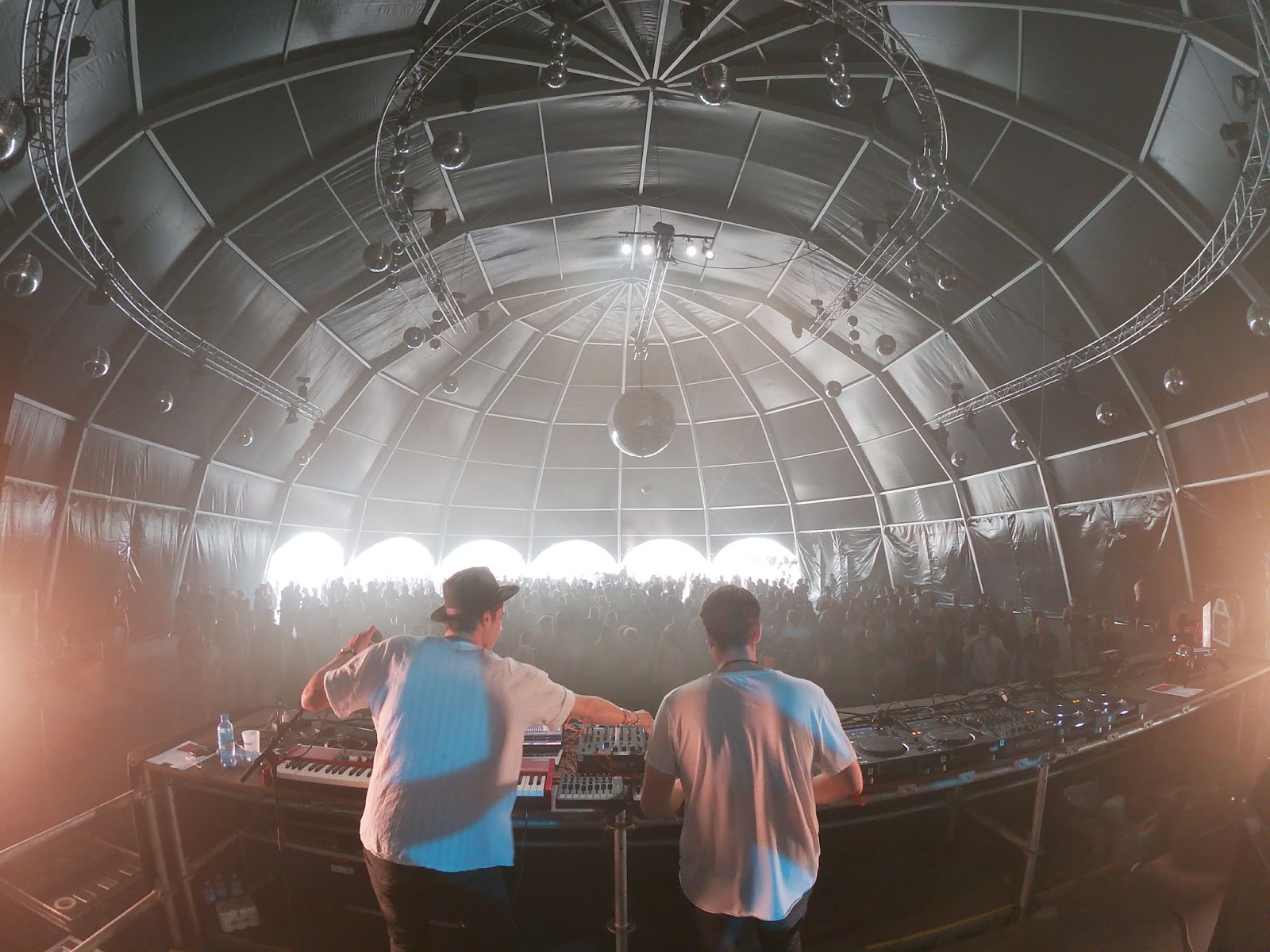 It was a Wednesday afternoon, MW artcar’s engine started and together with a wave of bikes we began our ride through the desert. With a beautiful shining sun we were slaloming through massive art installations on the playa, getting impressed by the incredible conviviality of the lifeless desert. Julien on the saxophone, Thomas on the piano, we begin our new live set with a remix of Kokoroko we made for that purpose. We feel relaxed.

Halfway through the set, the wind increases and we can now spot a cloud of dust approaching. Within a few minutes, we became surrounded by a dust storm!
Praying our gears won’t drop on us as we are aging by the minute with our white sandy hairs and eyebrows. We eagerly continue, until the clouds and the storm starts clearing and the sunset shines through the dust. Magical moment. This is the type of memory that gets engraved in your heart forever. 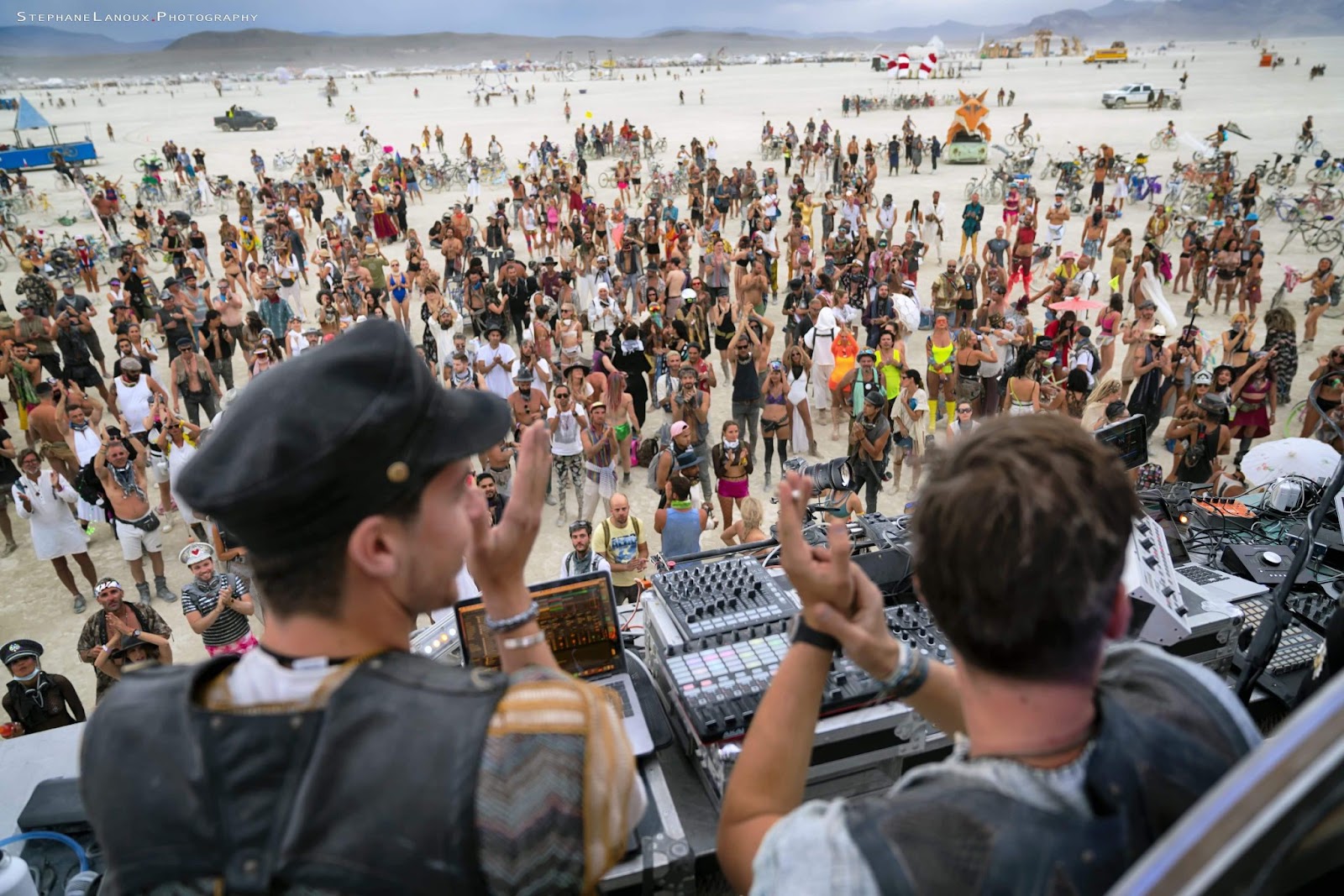 Parallells & Maalem Omar Hayat –  Moga Festival
In October 2019, Moga Festival asked us to compose their Moga Creation with Maalem Omar Hayat. An initiative creating bridges between tradition and modernity, combining traditional Moroccan music and electronics. So we decided to come a week prior ther festival to rehearse. Maalem Omar Hayatt welcomes us with open arms in the sacred rehearsal place of Yerma. We sit down around a humble silver Moroccan coffee table to eat grilled sardines and cooked red snapper.
As the moon rises over the white Minaret, we stand up from the contrasting turquoise on red pattern carpet, Omar picks up the three strings guembri, Ahmed and Abdel slip on steel crotales, Thomas stands in front of the synthesizer, Julien twists his sax mouthpiece and plugs in the drum machine. In the middle of Essaouira’s Medina, we started rehearsing.
3 days later, the concert was happening in the tropical Secret Garden Stage, bedecked by hanging vines and colorful flowers. Wielding his three-string guembribri like an acid-soaked Hendrix, the perpetually smiling Malaam Omar Hayat plucks at the square bass-like instrument with unbridled joy. The collaboration stirs something deep from within the crowd as the music swings from our electronic beats to moments where Malaam and his co-singers take over. An organic fusion of these two worlds: the gnawa musicians dancing wildly, dipping and ducking, attacking the iron castanet krakebs, while Thomas plays Ray Manzarek melodies on his Nord Stage 2 — a sort of Berber “Riders on the Storm.”

Working the laptop nearby, Julien occasionally adds the lonely wail of a saxophone, layering a melancholy Vangelis Blade Runner vibe to the proceedings.
The crowd, mainly Moroccan showed their traditional move while keeping a techno dance move edge. You could see and feel how proud everyone was, it was definitely an emotional moment for us
A moment that was actually filmed by Arnaud Moro that you can see here: https://www.youtube.com/watch?v=5CcLy5epyb0 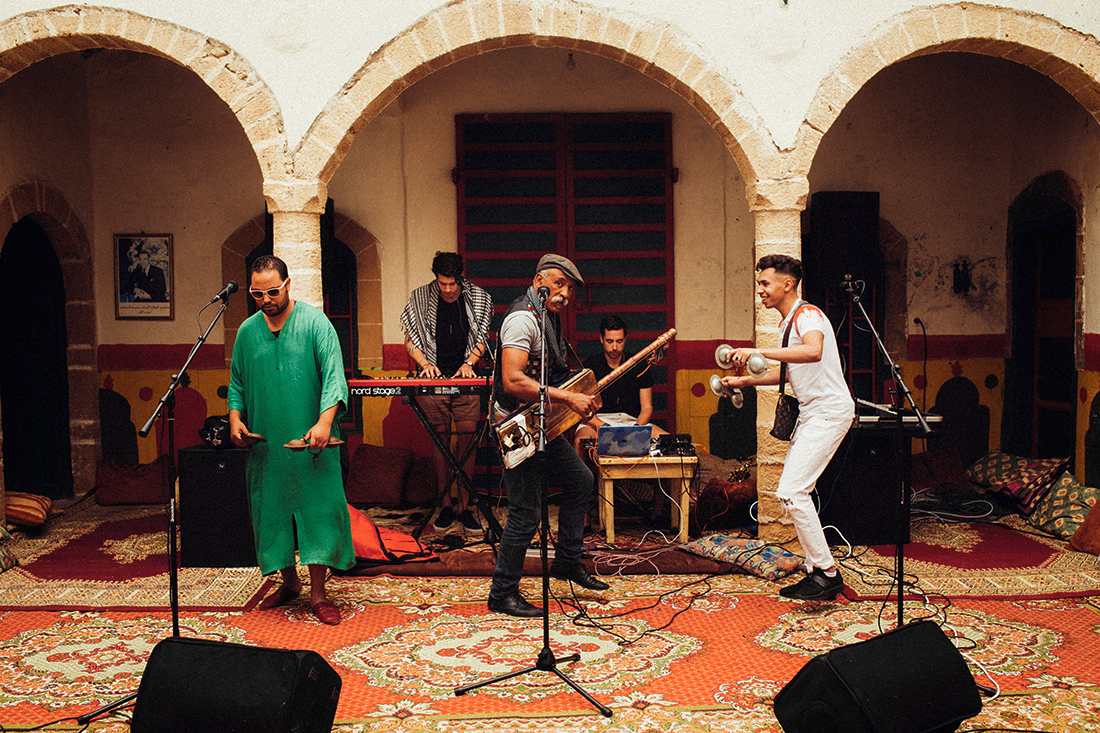 Not really a festival but definitely a festival feeling in Katerblau Berlin every week. With all its different rooms and outside areas, Katerblau has been one of our favorite clubs in Berlin for years. One memorable night was our extended set in the, now closed, Kiosk.
We opened the room with our track The Smooth Gardens, which we tried for the first time, and the room filled in no time. Surrounded by wood installations all around, a big tree in the middle of the dancefloor, the crowd started grooving.

After playing for 2 hours, we started a memorable b2b with our best friend Sam Shure. Keeping all our secret weapons, we were surprising and impressing each other and the vibe was just out of this world. This was one month before they closed the kiosk for good, and is also one of the reasons we keep that night as a precious memory.  You can listen to the first  hours of the set here: https://soundcloud.com/parallellsofficial/parallells-katerblau-berlin-20-01-18-kiosk

The most recent festival was in WesterUnie during ADE performing the album with our own band while our dad proudly filmed us from the crowd. Alessandro Mazzieri setting the funky ground on his electric Base, Nicolo Ricci taking us to the moon and back with his tenor Saxophone, Simone Cesarini golden finger making his guitar and the whole crowd weeping with sensual joy. It was a dream come true to be performing our first album ! 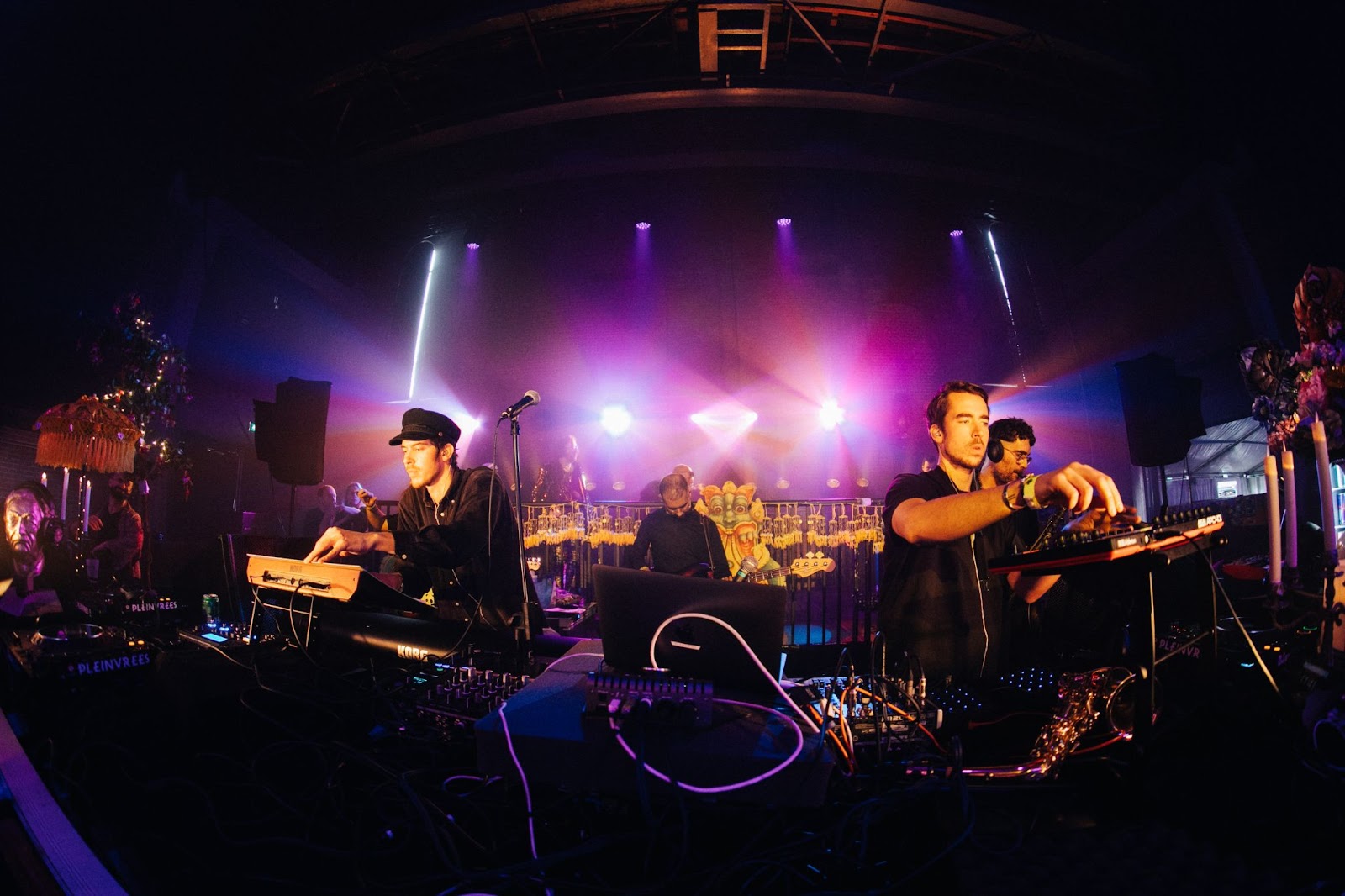 Keep up with Parallells on Facebook and Instagram. Parallels’ debut LP, A. Day, At is out now via Klassified Music. Listen to the release here.
November 24, 2021 By Contributing Writer