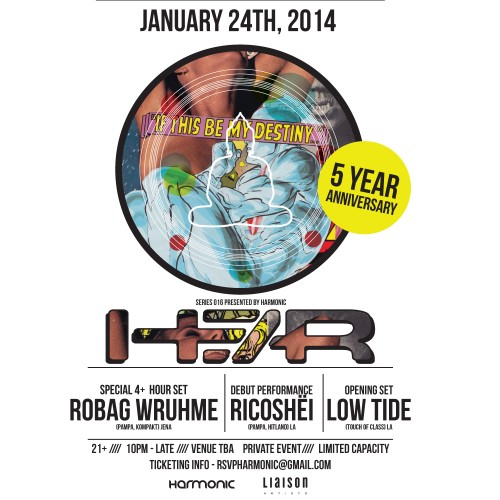 It was once said somewhere that absence makes the heart grow fonder. After a 6 month hiatus, Harmonic is back in 2014 to sweep LA off it’s feet with an anticipated HEAR gathering on January 24th featuring an 4+ hour extended set by beloved icon of the German -and worldwide- electronic music community ROBAG WRUHME, as well as the debut performance by the newest members of the Pampa Records’ family, RICOSHEI (pronounced ‘Ricochet’). This will be the 16th chapter in this half decade saga known as HEAR, and this bill boasts a lineup worthy of it’s gravity on paper.

Although this 5 year anniversary boasts one debut, the night marks the third stage that Robag Wruhme aka Gabor Schablinski has graced for Harmonic in Los Angeles, and those that have had the opportunity to attend in the past can attest to the magnitude of his performances. For those who aren’t familiar, this “Lege'” was one half of a little duo called Wighnomy Brothers, and one of the men in Jena, Germany – his place of residence – responsible for the prestigious Freude am Tanzen label. His discography consists of hundreds of releases and remixes on labels like Kompakt, Pampa, Vakant, Circus Company, Sonar Kollektiv…(the list goes on and on and on…). It’s been speculated that there’s not a soul with the slightest interest in electronic music who hasn’t danced to a track by him, or influenced by him. The man with the bizarre releases and titles is renowned to be a highly entertaining DJ – although sometimes a bit deranged, he always manages to hold it together with ease, delivering sets that will seriously blow your socks off. Robag has been actively producing since the late 90’s, and DJing as long as who-knows-when? He’s keen on the opportunity to spread his wings musically during extended sets, and takes the listeners on a dance floor voyage which are about as good as it gets around these respective parts.

That being said, make sure not to let your guard down before Robag goes on, because RICOSHEI will just as likely cause some minds to blow. This recently formed Los Angeles duo is comprised of Nikko Gibler and Jake Patrick, who’s new production, live, and DJ project is a breath of fresh air into the saturated electronic music market. With an EP coming out on DJ Koze’s esteemed Pampa Records in early 2014 with a music video, and deep library of unsigned music to follow, Ricoshei looks to contribute their influence on the future of dance music. These boys have a highly diversified palate and an itch for perfection. Their taste is rich, and their sound is undoubtedly unique and versatile. Words that come to mind when describing their productions are groovy, worldly, underground, pop-sensible, live-sounding, e.p.i.c. dance jams. Harmonic is proud to debut these talented two, and suggests that you arrive early to see what all the hype is about!

Keeping the sap to a minimum, the past 5 years has been one heck of a ride over at the HEAR headquarters, and Harmonic would like to express gratitude for everyone’s support and contribution to the cause after all this time. Lots of magic has happened over the years, and it’s looking like HEAR 016 is going to continue to add to the legacy.

This is the party to be at this weekend and we are ecstatic to hook up a pair of tickets for a couple lucky party animals!

Winners will be announced early on Friday January 24th and your name will be put on the list +1.