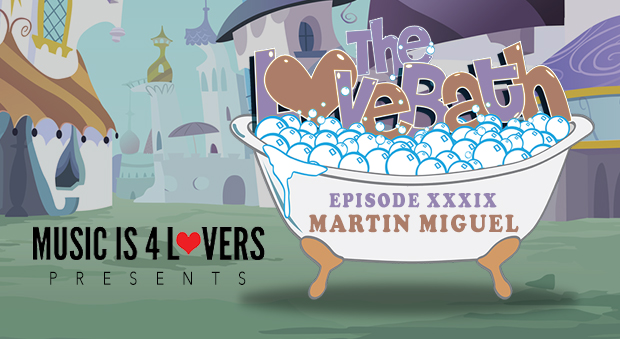 Martín Miguel, our compatriot and founder over at Washington, D.C. based imprint, Better Listen Records, is at the helm for this weeks installment of The LoveBath. The Peruvian transplant has been steadily building an empire in the Capitol City from hosting his own events, to providing warm-up duties for the city’s multitude of visiting headliners… managing every aspect of BLR and it’s burgeoning sub labels and making the time to contribute to blogs like Sleazy Beats and Bolting Bits.

We’re stoked to have Martín provide us this exclusive mix… if you’ve been following my recent posts, you may have caught our premiere for his recent 12″ by Swedish producer, Ari Bald. It’s also been no secret that BLR sits squarely at the top of my list of favorite labels and I look forward to spreading their gospel far and wide. Find Martín’s LoveBath mix below as well as our usual interview.

Tell us a bit about yourself…where are you from? where are you now? What attracted you to music? What music related projects are you working currently?
I’m from Lima, Peru originally, but grew up in the DC area. I’ve been back in DC for about four and a half years now since finishing grad school.

I’ve always been passionate about music and started DJing during my freshman year of college. At the time, I was mostly into 90s/2000s underground and alternative hip-hop. Over time, I shifted more towards playing disco and house music, though I still love the production aesthetics of classic hip-hop and I think it carries over in my taste.

My primary music project is my vinyl record label, Better Listen Records, which I manage and A&R for. It’s just hit one year of formal operation and seems to be doing healthy. Quietly, I’m trying to step my own production game up, but it’s a work and progress. And a goddamned cliché to say that!

Let’s dig a little deeper into Better Listen Records… how did this project get started and what was the inspiration behind the label?
I used to run a blog called Dance Party Chronicles and I did a feature on Mike W. from Kolour LTD. We hit it off and became close friends and eventually he suggested I start my own label. It was something I had definitely thought about in the past (but had no idea how to execute it) and it felt like the right move to transition towards that especially with the parties I was organizing in DC and my growing connections in the scene. Mike ended up coaching me through the process and is still kind of like an over-protective dad for Better Listen at times, haha.

As far as the inspiration, sonically I think the label draws a lot of influence from deep/disco labels of recent times like Kolour, Sleazy Beats and Razor-n-Tape. But, if we’re looking at older references then I’d have to say a lot of late 70’s disco and early 80’s postdisco, with obvious aesthetics from 90’s hip-hop and the whole Detroit-style house vein. Branding and design wise, labels like Delusions of Grandeur or Heist Recordings were a strong influence for me.

You have a couple other label projects in the works, can you give us any info on those?
So there’s Secret Listen, which is a collaboration between Better Listen and Secret Reels. The idea there is essentially to do V/A releases that pull artists from both rosters and combine the disco flair of BLR with the lush deep sounds of Secret Reels. It’s been easy enough since Lee Dearn (who runs SR) is a good friend of mine and we have the same distributor for our normal labels.

Then, there’s a sublabel for BLR, which will be formally announced in a couple weeks. It’s called Better Listen Black Label and leans heavily towards the darker midtempo deep house sound. Following in the footsteps of labels like Delusions of Grandeur or Instruments of Rapture and the like for that one.

Anything else you’d care to share? Upcoming gigs? Releases? Here’s your chance to plug plug plug!
BLR’s next EP is out next week (on the 13th), it’s thatmanmonkz’ Feels Trip To The District and we’re super excited for it. And I already mentioned BLRBLK and Secret Listen. BLR008 will be out in December, but you’ll have to wait for that reveal.

As for gigs, we’re throwing a release party for BLR007 next Saturday (October 14th) at Eighteenth Street Lounge in DC. It’ll be a special night for sure.

Number-one, sure-fire party-starter in your DJ bag currently?
If we’re talking about a single physical record, that would have to be Bobby Analog’s Body Fusion 001. I’ve been wearing that wax down since last year and included my favorite jam from there on my LoveBath mix.