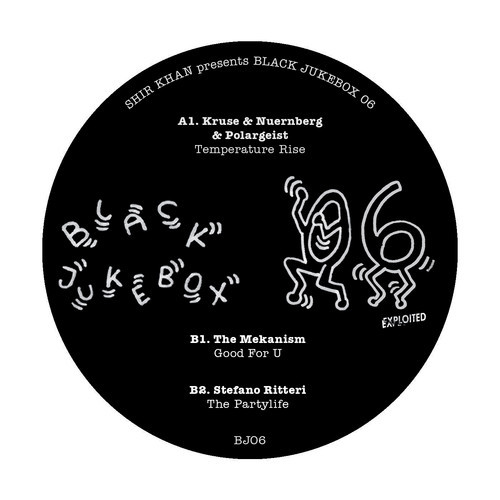 [Release] OK lovers, I’ve got a special treat for you this week, courtesy of the DJ, producer, label boss, and club mogul whose name seems to be on everyone’s lips these days: Shir Khan (No not the villainous tiger from the jungle book). The founder of Exploited Records has just released the latest edition of his infamous disco-tinged Black Jukebox series this week. The sixth release on this imprint which is, to put it simply, really, really HOT. Like, so hot it might steal your girlfriend and your boyfriend if you’re not careful.

This scandalous release kicks off with a track by Kruse & Nuernberg and Polargeist aptly titled “Temperature Rise,” which sits on a slow burning 110 bpm, but quickly builds into mad atmosphere of arpeggiated synth layers and filtered rhythms all held together by a tremendous palpitating bass line that is sure to take the party to a different dimension.

The next track, “Good for You,” by the french duo known as The Mekansim, is a prime cut of contemporary deep house. The song centers around an uplifting and hypnotically looped guitar riff that gets delayed and filtered and dances around a deep meandering bass line while the beautifully pitched-down vocals evoke feelings of euphoric sexual intimacy. And if those lyrics sound familiar, you might have seen the movie “Juice” (1992) with Tupac Shakur, as the soundtrack features Tammy Lucas’ song “Is it Good to You” which The Mekanism swiped for this track.

Last, but certainly not least, is Stephano Ritteri’s latest creation “The Partylife” which starts off full swing amidst a swagger of disco-lush percussion that eventually gets stomped by a huge and impetuously funky bass line as it busts in and struts atop a dance floor of smooth chords and groovy guitar melodies in true party form. Stephano Ritteri previously released material under the alias “Solo” on Dirtybird, Defected, and Om Records and has definitely crafted his skill as a producer as the groove of this track is unstoppable.

At this point it’s probably a safe to say that if it’s released on Exploited Records, you should check it out, because this label and its
leader Shir Khan have an undeniable nack for discovering talent and putting out some seriously cutting edge dance music.