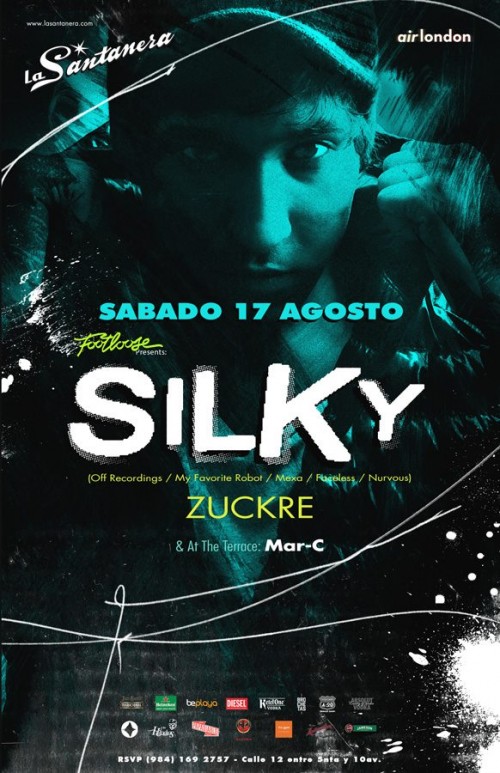 It was with this quandary in mind that FOOTLOOSE set forth to fill the void within the nightlife in Playa del Carmen. After events such as The BPM Festival and Flying Circus the bar was inevitably raised elevating along with it the demand from artists to return and creating a constant scene that rivals that of Mexico City with only a mere fraction of its population.  Our good friends at FOOTLOOSE Presents are bringing in the super talent that is Tigerskin and how awesome will this be for the little town of Playa Del Carmen!!

We are super excited to see our good friend Silky make his way down to La Santanera this weekend.  In support, another good friend, Playa Del Carmen’s own Zuckre, half of The Wize Guys, will be hitting the decks for a jammed packed night of high quality music that will be sure to keep you dancing non stop.  This is just another amazing event that FOOTLOOSE is putting on and we are ecstatic for this event.

With a career spanning well over a decade he’s established himself as an ever growing presence on the global circuit. Spending years perfecting his craft under some of the biggest talents in the industry, Silky has emerged as one of the most forward thinking, perceptive and well respected talents on the scene today. Mentored by the “Godfather of House” himself, Frankie Knuckles, Silky’s productions are continually supported from some of the world’s biggest DJ’s. A vinyl junkie at heart and a lover of all music influences the sounds that you hear in a typical set. However, what is the sound of Silky? It can only be described as the freshest future sounds of the underground; a desire to forge new directions in contemporary House music amplifying his roots in early Deep House & Techno.

Fast forward one year, and Silky has released and remixed on labels such as My Favorite Robot, Nurvous/Nervous Records NYC, Lucidflow (Berlin), Uberbeat, Gooseneck records, Muak, Noice, Dae Records and many more. His forthcoming 2012 collaborative cover of the Tears for Fears classic titled SHOUT alongside good friends My Favorite Robot (Visionquest, No.19, Crosstown rebels) has been getting support and played by some of the biggest deep house/techno DJ’s globally.

With a string of high profile releases on labels such as My Favorite Robot, Lower East, Underbelly and others scheduled for 2012 Silky continues to show the world that his next decade in music will be even better than the first…

Luis Alejandro Rodriguez Marín A.K.A. Zuckre and 1/2 of The Wize Guys was born in Nueva Esparta, Venezuela, but moved to the beautiful city of Playa del Carmen, Mexico when he was only 10 years old.

At the age of 12 his relationship with dance music started off as a hobby but has become a healthy obsession in his life over the last 9 years. Shortly after putting his hands on the decks for the first time, he began developing prodigious skills which one can appreciate every single time he´s put in charge of creating his well known domain over the crowd.

WIth his first EP on NastyFunk Records(Leeds,UK), he realized that the dream he had for many years is becoming a reality, with strong support from world renowned artists as WiLDKATS, Richy Ahmed, Sishi Rosch, BUBBA, Max Chapman, Ashley Wild, Clinton Houlker, Rebel, Dan Styles, Nobody Knows and more.

Now part as the Director, A&R of a dream coming true with his great friend and brother in crime, Miguel Angel AKA Dpaack and also 1/2 of Subsonnik, owner of Cream Couture Records, this label is the name of the creation of our big minds, Having a great support on the first releases of the label from recognized artists such as Lee Foss (Hot Creations), Matt Fear (Hot Waves / Digital Delight / Mexa Records), Raffa FL (Electronique, Uk), Lula Circus (DC10, Ibiza) and many more. Soon they’r gonna have the big party of the label in one of the most sought and appreciated places in the world as Ibiza on Sep. 14th,2012, So this label will have a lot to expect over the next few years, so do not miss this.

Future whispers a bright scenery for this dedicated youngster having the tools to get right to the top and the music to back it all up.