(Party) Anthology with Function and Rrose presented by Dirty Epic 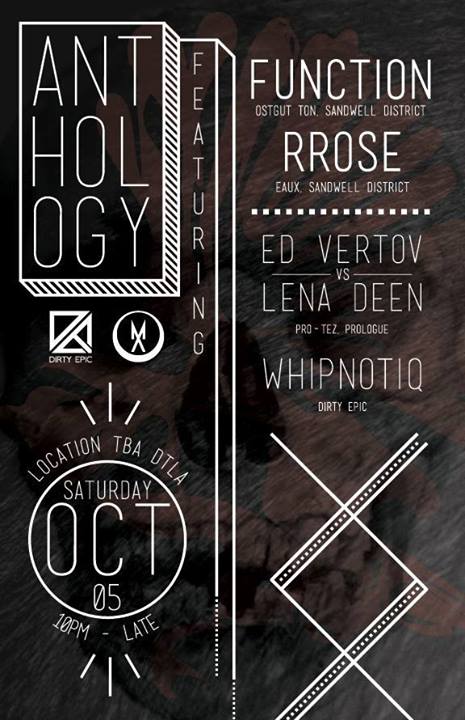 Our good friends at Dirty Epic have been throwing parties all over the states and most mentionable are known for their famous Coachella camp ground party every year and their massive label showcase party in Detroit this year with Ben Klock, dvs1, recondite, and patrice scott .  In the last year, the people at Dirty Epic have been bringing something new to Los Angeles in the form of cutting edge artists.  For their one year anniversary they are having a double headliner of pure techno delight featuring Function and Rrose.  These are two proper techno headliners that we are super excited to see them return to our beloved city.  Our guys at Dirty Epic have been working really hard and this line up is proof of that.  Make sure you come out and check out LA’s best new underground.  In the coming months they are bringing in Dystopian(Nov 1) and Prologue(Dec 7), so stay tuned of all the goodness to come.

A little about Function:
One of techno’s true underground heroes, Function, real name Dave Sumner, has been DJing and making music for over 15 years. Hailing from New York, he was seduced by techno music when Jeff Mills held a residency (as well as his own first) at the Limelight in the early 90s. Dave started to produce music and from the mid-90s onwards, put out music on Damon Wild’s Synewave and his own Infrastructure imprint. Together with Karl O’Connor aka Regis he worked as Portion Reform, putting out uncompromising music on Downwards and becoming the only non-Birmingham producer to release on the label. More recently, Dave moved to Berlin and, still working with O’Connor, set up the acclaimed Sandwell District imprint.