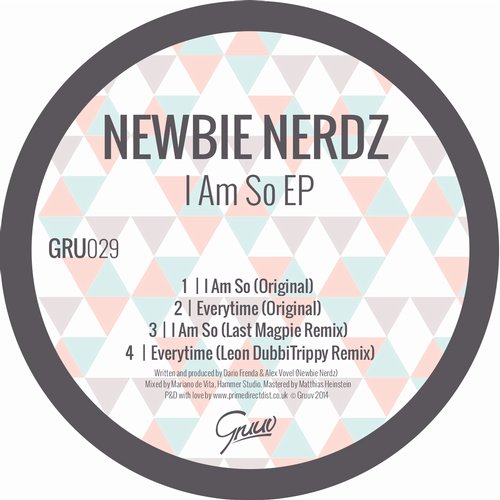 The Gruuv imprint will kick start 2014 this January with a four track single from Italian duo Newbie Nerdz entitled ‘I Am So’, and backed with Leon and Last Magpie remixes.  Newbie Nerdz’ delivers a classy, tasteful single here with ‘I Am So’ instilled with a widespread appeal through its powerful vocals and modern electronica vibe.

Newbie Nerdz is the collaborative name of Italian DJ and Producer duo Alex Vovel and Dario Frenda; their career has been steadily blossoming since their debut single back in 2012. The pair have now seen material released with the infamous Skint Records label among others and here Vovel & Frenda add Audiojack’s Gruuv label to their affiliations, a great step forward for them, with this promising inaugural release for 2014 opening what’s expected to be a groundbreaking year for them.

First up on the release is the original mix of ‘I Am So’, which sees the duo deliver an emotive slice of house music, fuelled by ethereal atmospherics, direct 4/4 rhythms, an unrelenting piano stab and a bumpy tom-driven bass hook. While echoing, heartfelt vocal lines add some musicality to the cut and implant a shimmering beauty into the record. Following is the second original track from Newbie Nerdz entitled ‘Every Time’, a contemporary electronic workout employing warbling pad lines, elongated bass tones, warm piano chords and modern male vocal lines, rounding off the original content on the single brilliantly.

On the flip side of the EP Hypercolour artist Craig McNamara aka Last Magpie reshapes ‘I Am So’, the British producer delivers a bass influenced interpretation featuring off-kilter drums, gritty analogue synths and snippets of the original vocal, tightly blended with an underlying murky ambiance. Then last up to close the release Italy’s Leon offers up a remix of ‘Every Time’, doing what he does best by dropping an infectiously hooky drum fueled rework, which cleverly evolves over six and a half minutes as additional elements are subtly worked in in a progressive fashion.