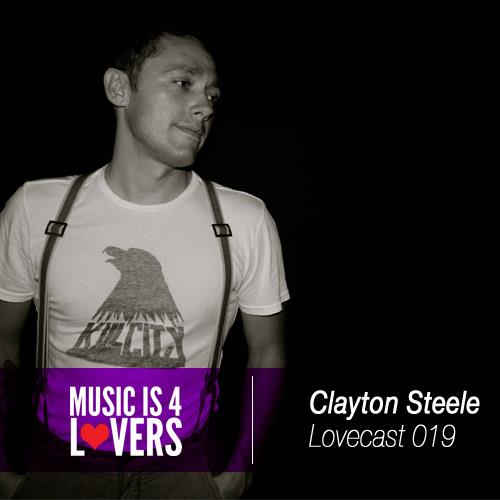 Although Clayton Steele is just starting to pop up on the radar, his love for electronic music began as a teenager in the early nineties. He started this journey as a DJ in his hometown of London, Ontario. He was known for his distinct sound and flawless sets at clubs and raves alike. But, a move to the states shifted gears in the Canadian native’s head. He began looking inward to bring his dream of making his own music into fruition. He has recently had releases on labels such as Save You Records, My Favorite Robot and No.19. Clayton Steele has a very diverse stylistic palette, which can be heard on his February 2013 release “Passion”/”Sleepwalker” on No.19. The release also features a slick remix of “Passion” by DJ T. This is a taste of what is yet to come, as he has a new single being released in April and a full length album coming out on No.19 toward the end of 2013. One thing is certain and that is we will be hearing much more from Clayton Steele.

I am Canadian and originally from London, Ontario, but presently live in Fort Lauderdale, Florida.

I am very lucky to be in South Florida and the music scene here is very rich and diverse.

Well, since London is pretty much between Detroit and Toronto, I must say I was pretty lucky to be exposed to some great music on a very consistent basis.

Having the opportunity to go to so many underground raves that were going on between Detroit, London and Toronto around 94 and beyond, I would say greatly influenced my taste in music.

I would have to say that when I moved to the states from Canada seven years ago is really when I began focusing on making my own music and exploring my sound.

I really have no plans to ever quit making music or djing, it is something that is just natural for me.  So, in other words this is going to be my lifelong passion and career.

I would tell them to work super hard and never give up.

there are too many songs from the late eighties and early nineties to even remember one specific tune that could be credited with changing my life.  But, I would say that I really loved that early nineties sound and still do.

I am releasing my first full album on No. 19, which is expected to drop in the fall.

Since being released on credited labels such as No.19 and My Favorite Robot, how has your life changed at all?

I would say that it has just really put me on the radar musically and I am really grateful to be able to be on these labels with not only great artists, but also a crew that I call my friends.  I am also looking forward to what the future holds for all of us and anticipate great success for all of us!

How have you enjoyed joining the No.19 roster, and how does it feel to be a part of their ‘Social Experiment’ party?

It feels great to be a part of the team musically and I have loved Jonny’s vision of “Social Experiment” from the start.

Are there any producers or DJs that you have never seen live that are on your list to see play?

What is your prefer method of music production?

Logic all the way baby!! With  my Siberian Husky and my Bengal cat by my side!!!

well…  the mix  I would say is a bit more dance floor friendly than other sets i have been doing lately.   I think i might have been in an upbeat mood when I made it!