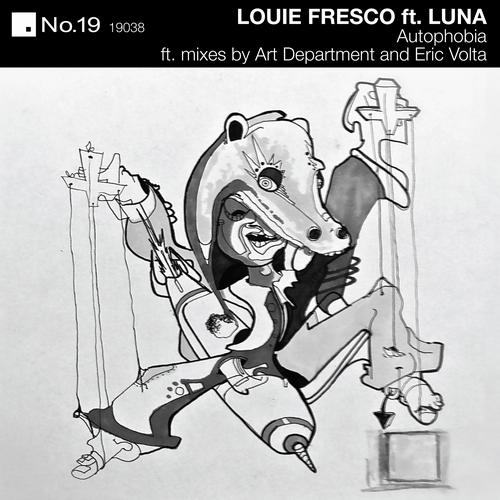 Art Department‘s influential No.19 Music is back with a new single that is once again destined for big things. It comes from Mexican Louie Fresco, a producer who is no stranger to chart success given the quality of his past releases on labels like Defected and Mexa. His new single for the ever on point No.19 (featuring vocals from Luna) is the lead cut from his forthcoming debut album due early next year. It comes backed with a stunning remix from label bosses Art Department, their first mix in some time for the imprint and a real gem from the ever on-point production duo. Also offered up is an equally interesting effort from Eric Volta and that is sure to take the versatile young producer to the next level.

The first original ‘Autophobia’ is a super slo-mo, seriously emotive track with barely any beats. Instead its an alluring meditation on mood and atmosphere that slowly percolates with a buried deep bassline, otherworldly effects and only the lightest dusting of percussion. Of course key to its success is the dulcet yet tortured sounding vocal of LUNA that drifts atop the whole thing. Its an intimate affair that eventually breaks out into some slightly more tumultuous drums in the final third and is one of the most tender tracks you are likely to hear this year.

Art Department’s Black Sky remix re-imagines the track for the dancefloor. Vibrant production has tinkling piano keys standing out nice and loud as wobbling sub bass props the whole thing up and chunky kicks drive things forward. Its heart-breaking emo-house that also makes you want to dance and once again proves Art Department to be masters of their trade. Then it’s Ellum Audio and Lower East associate Eric Volta’s turn to re-interpret the track. He does so with nice loose, organic sounding drums and frazzled synth lines and hides the original vocal in the spaces in between.

It’s a big bold track yet manages to retain its human emotion and nagging sense of loss.Finally, My Ghost closes out the EP in rich house fashion. Big rubber kick drums, tortured tones that wave up and down the scale throughout and slightly ghoulish vocals make for a vampire disco styled track that sweeps you up and carries you along on kinked waves of rhythm.With this EP No 19 suggest to us that dance floors need not be afraid of real emotion and honest lyrics, and for the way Louie Fresco and LUNA carry that off, it’s hard to disagree.