(Interview) All Day We Dream with Maher Daniel & Jon Charnis 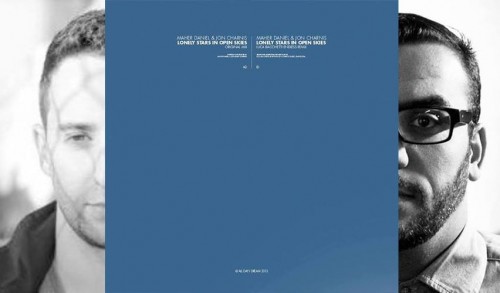 It is always amazing when two great artists collaborate to create something special, and that is exactly what Maher Daniel and Jon Charnis did with their new single Lonely Stars In Open Skies.  We lost it when we first heard this gorgeous celestial track, properly released on Lee Burridge’s ethereal All Day I Dream imprint.  It is like something out of a fairytale with its enchanting melody and captivating drums that keeps you floating from start to finish.  The release also features an exquisite remix from Luca Bacchetti that has already been getting loads of play time from some of the world’s top DJs.

With stellar releases on Innervisions and Supernature and some killer remixes for No.19 Music, Leftroom, and Faceless Recordings, Jon Charnis has had a special inaugural year- all well respected labels, all incredible tracks.  His exquisite sound has earned him instant credibility and has made him very much in demand.  Maher Daniel, in a similar fashion, has had a fantastic year,  releasing on All Day I Dream with other massive tunes on Get Physical Music, Supernature and Souvenir Music, along with some fine remixes on Leftroom, Mexa, and Alola Records.  Maher has also been led into the spotlight recently, and after he and Charnis imprinted their talent so distinctly in 2o13, we cannot wait to see both of them shine in the future.

We were lucky enough to chat with this dynamic duo about their upcoming release and working together, and here is what they had to say….

How did you two link up?

J: We were running in the same circle – we had a lot of mutual friends and seemed to be getting on the same labels, so it was natural to get in touch with Maher. So you can say we met online!

M:  From what I remember, Jon had hit me up on my fan page saying he was a big fan of my music. And at this point I had not realized he was the one that wrote Prophecy. It was kind of a coincidence actually, so I wrote back to him letting him know how great the record was and sometime down the line it would be cool to work together. I was actually in the middle of writing Lonely Stars and decided to send it over to him and that’s when the top line came in which brought everything together.

What was your inspiration for this track?

J: Maher sent me this lush melody to see if I wanted to add my touch on the track and it quickly formed from there. We actually had All Day I Dream in mind the moment we wrote it. The vibe of the label is exactly what inspired us, so I feel very fortunate it found a home where we envisioned it.

M: Coming from a musical background, it was important for me to stick to my roots. I had really drawn away from writing Techno and Tech House tracks, and then it all just started coming back to me. The musicality which was lacking in a lot of the music that was coming out at the time was really a big inspiration and I just wanted to push that and really get it out there.

How was it working with one another?

J: Pretty effortless since we seem to be on the same page musically. It was one of the fastest and easiest collab sessions I’ve had. Also, by that point I had gotten the hang of remote collabs via dropbox!

Was it difficult to work together since you are both on different sides of the country?

J: Not really, I actually feel it’s easier to collab away from each other because you have the advantage of both people feeling comfortable in their respective studios. I am A LOT faster at my home studio than at friends’.  Having said that, it would have been nice to be in the same studio during the arrangement. We used Soundcloud to leave comments on the draft version and Dropbox to send each other stems quickly.

M:  Not really, I think when you are both in the same mind set and mind frame it’s really easy to get the message across with what it is you want to do.

What would you say are your favorite attributes about each other?

J: I like that Maher is decisive about the parts of a track. If it works, it’s good to go and he moves on to the next phase. This is definitely not one of my strengths

M: His eagerness and ambition to grow as much as possible.

Is there anything special in the future we should know about?

J:  We’re ecstatic that Art Department hand picked this track for the first ever BPM Compilation that they are mixing. I’m currently working on remixes for No.19 and My Favorite Robot. I also have some big big news that I can’t share yet-but please stay tuned!

M: At the moment nothing crazy, just more music production and sticking to my guns.

Can we expect another collaboration from you two?

J: This track seems to have gotten some amazing support already so I think it would be silly to not work together again. Just a matter of time and schedules, Maher is quite the busy man these days.

M: Absolutely! I don’t see why not, the first one went really well and is getting a lot of respect and attention from our peers I can only see bigger and better things happening.

A bit about Maher Daniel…
Maher Daniel is a name that many people have had on the tip of their tongues for the last couple of years. With releases on some of the biggest labels in the industry, there shows no slowing down for Mr. Daniel in the near future.

After a successful 2011/ 2012, we find ourselves in 2013 where Maher has taken the time to do a little soul searching and really focus on his music and art form. Teaming with Montreal local Gab Rhome (Get Physical Music, Supplement Facts), the duo have found themselves in an unbreakable melting pot of creation which has attracted the attention of some of the leading labels and artists in the industry.

With 2013 in full motion, Maher recently joined Dubfire’s infamous boutique agency, The Bullitt Agency, where he has settled in with the ranks of some of the most upfront artists in the industry such as Dyed Soundroom, Dan Ghenacia, Shonky, Carlo Lio, Luca Bacchetti amongst many others.

As a DJ, many who have had the opportunity to see Maher perform only come out praising the energy and intensity that he puts out with his DJ sets.  A resident of the infamous Stereo Nightclub in Montreal, he has played along side some of the biggest DJs in the world such as Sasha, Ricardo Villalobos, Dubfire, Richie Hawtin, Lee Foss, Nic Fanciulli, Josh Wink, Lee Burridge, Jamie Jones, Damian Lazarus and many more. He has graced the decks at some of the most upfront festivals such as Igloo Fest, Piknic Elektronik, Creamfields and Sunrise Festival.

It seems there is no stopping as he continues to push forward along side some of the very best in the industry.

A bit about Jon Charnis…
After years of producing music under various guises, Jon Charnis found his true calling in the slower, darker, and deeper spheres of House music. The re-invention manifested beyond music as the former DC native relocated to the city of Los Angeles while launching his new moniker (his actual birth name). From then on, it did not take long for him to make an impression. His track ‘Prophecy’ was spotted by Innervisions boss Dixon, who signed the track to his prestigious Berlin based label after road testing it at some of the world’s premier parties. He followed this up with an official remix of Art Department’s Burning Man anthem, ‘Robot Heart’ on No.19 records, a collaboration with production partners Lovecraft and Prab K. The streak continued with releases on more top labels including Supernature, All Day I Dream, and Leftroom Records.

As a DJ, Jon Charnis’ international profile has risen just as quickly. With gigs at Space, Ibiza and Sonar, Barcelona already under his belt, 2013 saw Jon playing across the globe at other hotspots in Berlin, Munich, London, and Amsterdam.

Jon Charnis has received support by world renowned DJs such as Art Department, Dixon, Tale of Us,  John Digweed, Steve Lawler,  Thugfucker, Audiofly,  Anja Shneider, My Favorite Robot, and Matt Tolfrey, to name a few, proving 2014 as a year to watch this fast rising DJ and Producer .