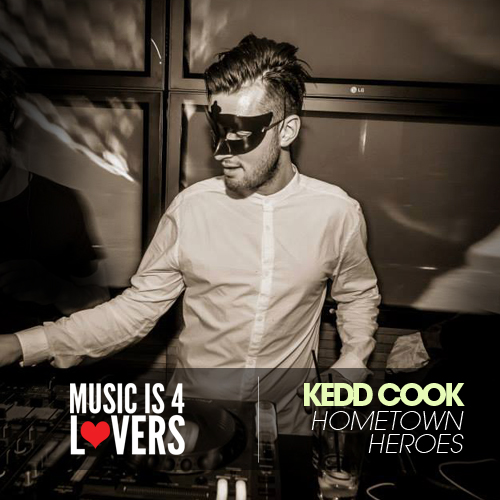 There are plenty of DJs who are masters at giving people exactly what they want. After all, it’s kind of their job. In tiny barroom dance floors with dim light and swanky ambiance, Kedd Cook hopes to give the crowd a little bit of what they need. That means introducing a diehard dance crowd to established headliners such as Tim Green, Lee Foss, Aeroplane, Maxxi Soundsystem, and Jesse Rose, to name a few for which he’s been in direct support of. These are the types of acts that most small clubs and indie promoters would kill for, not only for their notoriety, but for their musical influence. Kedd Cook, born Ian Alexander, knows that choosing quality, intellectually adept dance music only makes him and his weekly residences more distinctive. Working with tastemakers who play both digital & vinyl rare tracks, everything from old funk soul to deep house, and techno Ian has learned the ability to peg artists who can throw down rare and different forms of electronic music you don’t normally hear at big clubs. Kedd likes to keep a fun, upbeat dance vibe while simultaneously pushing the envelope with music that’s different from the norm.

Life after being named 2010 Best DJ by OC Weekly has been good for the Newport Beach native, who grew up in a family where he says, “money was tight.” The 27 year old has been throwing underground warehouse parties since 2007 and has been the resident DJ at La Cave’s infamous hipster dance night on Wednesdays since 2009. His reputation in the industry has steadily increased playing at some of the highest ranked venues and festivals in California. Even after performing at Exchange LA, Avalon, Pacific Festival, Wet Electric, and Insomniac’s Electric Daisy Carnival Wide Awake Cart in 2012, his success hasn’t reached full swing.

Alexander locks himself in the studio focusing on music, fashion & design. “I want to try to find my own sound and produce something that I will appreciate for the rest of my life.” Kedd is working on releasing his own EP, but holding out for the right major dance-music label that will best cultivate his creative vision. “Everyone goes through phases, and as long as you keep an open mind and are always on to the next thing, then that’s where you will be happy, I’m going to find something constantly that will blow my mind and draw me in that direction.”

Why Kedd Cook and where did it come from?

We would always spell kid as “kedd” when chatting on AOL Instant messenger (Aim). Back in the PC days of America Online & Netscape we always thought that it was cool to say to each other, “Yokedd! What up kedd? Where you at kedd?” Art, design, typography & graffiti have all been a huge influence on my creative background. It’s short, visually appealing & balanced. Kedd Cook pretty much evolved from doodling in class since high school & has stuck with me to my first days djing.

So many parties… All these incredible moments. Umm, would have to say the Late Sessions warehouse party we threw a little less than a month ago in DTLA w/ Sante (Desolate, Cocoon, Viva). The party started at midnight and the energy flowed so smoothly all the way up until the very end at about 6am when the property manager turned on the lights and pulled the cord.

So far Dream artists to book and open for?

I’ve been very fortunate to open for such a large spectrum of artisits & dj’s. At this very given moment, I would probably say Loco Dice, Subb-an or Adam Shelton. I’ve been playing a lot of smaller, intimate parties recently and it’d be nice to play some bigger rooms w/ some extended 3-4 hour sets. Taking the audience on a journey is something I’ve seen these three do so nicely with their energy & groove.

Favorite part of the So Cal scene?

It’s been nice to bounce between LA, OC & SD. I’m so proud at how far everyone’s come over the past few years. With that said, I’ve seen Los Angeles take leaps towards the right direction. Planning on moving to LA in May, can’t wait.

Favorite party you have ever played?

La Cave Wednesdays were definitely my stomping grounds. It was such a good feeling creating the vibe in there from nothing. Pacific Festival was definitely a fun experience as well. I couldn’t tell you that one particular party stood out among the rest. I love the vibe in a dark intimate venue, or large warehouse just as much as I enjoy playing poolside in the sun.

If I had to choose between the two nothing beats the beach, I meannnn.. Sun, waves, palm trees, warm sounds. I’m happy.

Here’s 5 that I’m currently diggin’ and playing out quite a bit.

Talk To Me – Daniel Steinberg

In My Soul – Seff

Anything you want people to know… upcoming gigs or music?

Making the move to LA, locking a few new residencies, joining the RollingTuff family, and focusing most of my time in the studio this year. I’m very happy with how everything is turning out. This week is going to be a fun one! Playing with my friend Miguel Puente (No 19, Akbal Music, Diynamic) on Wednesday at Clinic in Los Angeles. Thursday with Goldroom at SHOREbar in Santa Monica and, Saturday playing alongside the homies Jon Dadon & PillowTalk down in San Diego w/ all of you wonderful people. <3