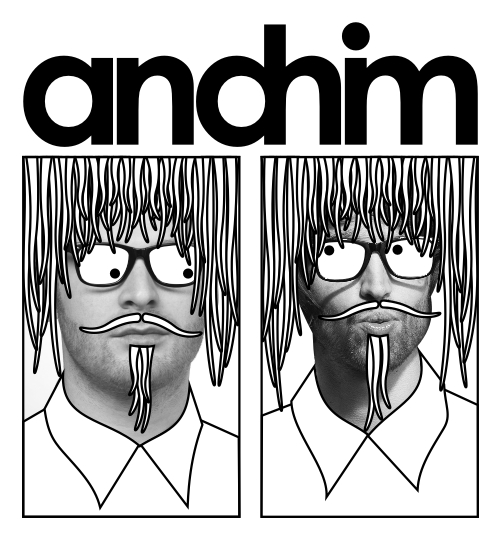 After playing on Listed’s boat party Ship of Fools during Miami Music Week, the German duo andhim has become somewhat of an obsession for those who love the deep and sexy sounds of the underground. Since Miami, their mixes and productions have been on repeat. Their speciality is “Super House,” a self-proclaimed genre comprised mostly of samples, alluding to their old-school sensibility that guarantees getting crowds moving.

Simon and Tobias don’t fit today’s typical DJ mold and neither do their sounds. They are a breath of fresh air, bringing a new and infectious energy to the dance floor that is nothing short of Super-Fun.

After being hailed by many as the best break out artist to come out of that insane week in Miami, we are excited to have the chance to chat with you and learn a bit more about you guys.

You guys played on the Listed Ship of Fools boat party and your ability to blend samples of old school favorites with the house sounds of the underground scene got people dancing and wanting to know all about you.  You definitely made your mark and put yourselves on the map with that performance and you left everyone on that boat wanting more!

Did you prepare any special edits or tracks for the Listed party or was everything just happening on the fly?

Well, first of all a big thanks to all the people who danced with us and the continuing awesome feedback on our set. Since it was our first time in Miami and we only had a time slot of 90 minutes we actually played 80% of our own productions. Some unreleased tracks as well. We wanted to present ourselves. This was our preparation.

What impressions did Miami make on you this year? Did you take home any specific inspirations?

The Ship Of Fools was actually the only party we went to, since we arrived on Saturday night, but we had a lot of fun the days after. We did a nice Everglades-Air Boar tour and wrestled some Alligators down as well as some hardcore beach activities like swimming and paragliding.

Let’s go back to the beginning, how did you two hook up with each other?

We met at Chat-Roulette!

There are so many artists living and working in Berlin. What do you think it takes for an artist to really stand out and break through?

[Editor’s note: Tobias and Simon live in different cities in Germany at the moment, Cologne and Berlin] [Berlin], It is all about the look: six-pack, shoulder-length hair, coming to the gigs with a Segway. Taste in music or own productions are irrelevant!

You’ve named your genre “Super House,” what’s that mean exactly and why’d you give it that title?

True, Super-House is our definition of our style. We thought we should end up with the ridiculous use of all these genre-types and give our style its own name.  It is basically just super music which shall make the people feel super as well!

Did the scene in Berlin influence the development of that genre a lot?

No, not at all! We think Berlin sounds completely different to what we’re doing. Wait a minute…so in the end maybe it had an influence after all.

What’s the production process like working in a duo? Do you have specific tasks in the studio? Someone writing the melody, someone else arranging the whole track…

We’re living in different cities. I’m [Simon] living in Berlin whereas Tobias still lives in our hometown Cologne. It’s mostly sending ideas in and out. If we’re both convinced of a song, we try to finish it together.

We are working with samples like 99% of the time. Old school!

What’s your take on the “live show,” any plans to develop one?

Could be. Simon tells jokes from time to time during the sets, which is kind of a show. But maybe we’ll find a way to express ourselves in an appropriate way eventually. We don’t want to be the next laptop live act!

Now that festival season is starting up, what do you guys have planned for this summer? Anything coming up you want readers to know about?

Festival summer is gonna be a bomb. Unfortunately we won’t play at any US festival but we’ll play Fusion Festival, MELT and Nature One in Germany as well as three shows for Get Physical Music at Privilege (Ibiza), Off Sonar (Barcelona) and a lot of other festivals you probably don’t know. In May there will be our first release on Get Physical named “The Wizard Of Us.” Watch out for that baby!

Craziest thing that’s ever happened in a hotel room?