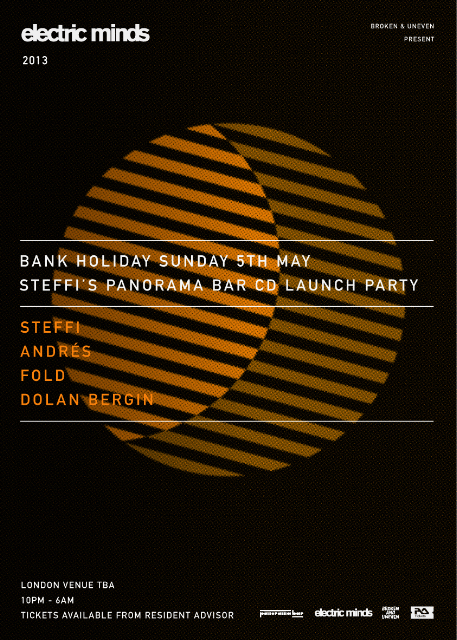 Before embarking on a Spring/Summer tour that makes stops at Parklife, Sonar, Lovebox, SMS and Dimensions Festival, electric minds will once again take over a bespoke space on Bank Holiday Sunday 5th May for Steffi’s Panorama Bar 05 mix CD launch party.

Being one of the Berlin nightclub’s most celebrated residents she will now follow in the footsteps of her peers Tama Sumo, Prosumer and Nick Hoppner to curate a much-anticipated studio mix for the infamous clubbing institution’s label Ostgut Ton. The Dutch-born DJ and producer has steadily built her reputation in House and Techno circles for silky and authentic Chicago House-tinged tracks whether it be the ubiquitous Yours from her debut album Yours & Mine in 2011 or more recent efforts on the Unified Fields LP with The Analogue Cops under their Third Side alias.

The mix CD is a snapshot of Steffi’s DJ sets as well as a testament to the sound she champions through her own productions and on releases via her label, Dolly. Led by warm, raw and jacking analogue House and Techno the compilation boasts exclusive material from luminaries such as Fred P, Juju & Jordash, Big Strick and long-time affiliate and fellow Dutch countryman, Dexter. On Panorama Bar 05 Steffi seamlessly changes the pace between stripped back efforts like Doze by electric minds favourite Endian to melodic Detroit-leaning Techno on Juan Two Five from one of 2012’s shining stars, Trevino, in a fashion that fans of her work have become accustomed to and newcomers can appreciate almost instantaneously.

Supporting her on the night will be the man who topped Resident Advisor, FACT and Little White Earbuds’ 2012 lists with his sumptuous Disco-inspired hit New For U, Andrés aka DJ Dez of Slum Village. The Detroit native has been dabbling with House and Disco offerings for some years, mainly on Moodymann’s KDJ and Mahogani Music imprints, but he recently took a giant leap with the launch of his La Vida label on which the aforementioned track was released so buckle up for a balanced blend of Disco, Funk and off-kilter House from the Motor City veteran.

Newcomer Fold appears for his debut set at electric minds after pricking up a few ears on his recent Slime EP for George FitzGerald’s ManMakeMusic imprint. Avoiding pastiche with unpretentious nods to the likes of Shed with its submersive dub-Techno basslines and crystal clear synths, it’s no surprise that he’s been snapped up by the electric minds label arm for an EP later this year and looks set to be a valuable addition to the UK’s growing Techno talent pool.

electric minds resident and founder Dolan Bergin will be on hand for one of his much-lauded sets and after recent outings at Panorama Bar, BLOC and Horizon Festival he will be pulling out some firm favourites and future classics to tide the electric minds faithful over until the night returns for its 8th Birthday in October.