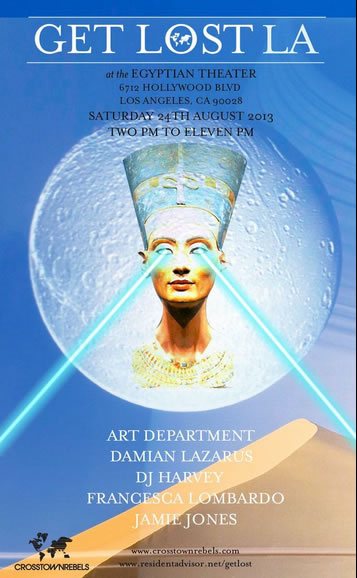 Are you ready to Get Lost?

A harsh, brazen stretch of Hollywood Blvd, punctuated by strip malls and fast food joints. Nestled amidst the seediness, a temple celebrating another era, another civilization; a time of mysticism, spirits, Gods and Demons…music from another world;

drums, dancing…step inside and Get Lost…After eight groundbreaking years in Miami, Crosstown Rebels’ Get Lost event has grown to become the cultural cornerstone of the Miami Music Week, and a party series of international renown. A bewitching 20 hour session, that one stumbles into in the early morning hours and doesn’t leave until way after dark. Icons like Richie Hawtin and Carl Craig, play alongside fast rising stars like Skream and Eats Everything. Sets are played that define careers and are the talk of WMC.

In August 2013 Crosstown Rebels will host its first ever day party in Los Angeles, truly capturing the essence of what makes Get Lost so special. Get Lost LA will welcome Crosstown Rebels’ biggest stars –including Jamie Jones, Art Department, label boss Damian Lazarus and the fast rising Francesca Lombardo. For this special LA edition Lazarus has also invited one of his DJ heroes and an LA icon, DJ Harvey for a very special set.

The magical environs of the Egyptian’s Courtyard will be transformed by the other-worldly vision of Damian Lazarus. The Get Lost stages at Insomniac’s Electric Daisy Carnival’s and Wonderland festival series have proven immersive, with production focused on allowing people to surrender themselves to underground dance music, rather than overawe. In LA, Crosstown will bring this big stage experience to an intimate venue for the first time, creating something truly special in the heart of Hollywood.

In 2013 Crosstown Rebels celebrates 10 years of existence. A world tour, plus albums from the likes of Totally Enormous Extinct Dinosaurs and Mathew Jonson, and releases from new faces like Francesca Lombardo, Amirali, Fur Coat and Subb-an, have ensured the label continues its tenth year like every other, at the coal face of bleeding edge underground dance music.