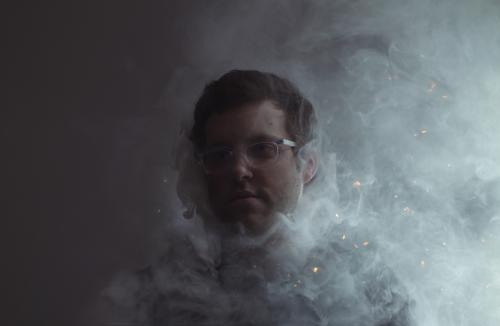 Baths, an experimental electronic project of Will Wiesenfeld who is a classically trained musician, combines instrumental beats and falsetto vocals to create a dreamy chillwave ominous sound.

The name comes from Wiesenfield’s childhood memory of taking in art and music while enjoying a bath. His second album, Obsidian, which is out now on anticon, received rave reviews and once again earned a spot on Pitchfork’s “Best New Music” list. Wiesenfield’s stunning debut album, Cerulean, enjoyed the ranks of the coveted list three years ago.

Of the creative process for Obsidian Baths says,

“Anything I found that felt like a unique vision of darker emotions or atmospheres, I tried to absorb. Being a positive and outgoing guy made it that much more difficult getting into that mindset. It was a matter of tapping into that and returning with songs that felt genuine and somehow from my own personal experience.”

Baths made a stop in San Diego, as a headlining act at the Casbah last week and given the praise he has been receiving, we had to check out the show.

Following Houses, a Chicago-based electro pop band that left the crowd dancing, Baths kept the night up to par. Wiesenfeld’s angelic voice lit up the Casbah for anxious fans while creating a graceful ambience amongst the crowd. The vulnerability in his vocals paired with a psychedelic presence left the room swaying back and forth.

The front row of wide-eyed fans couldn’t help but follow Baths through their iPhone screens, trying to capture his passionate presence on their phones. No picture could do it justice. Something about Wiesenfeld and his partner Morgan Greenwood’s music that almost made you feel strange, but in the best and most euphoric way.

Charming the audience between songs, throwing out jokes and even apologizing for a musical error that no one actually noticed, Wiesenfeld’s humble personality shined through the performance. With a combination of darkness and grace paired with chillwave beats, this is one experiment that you don’t want to miss.

Upcoming shows, as a supporting act for The Postal Service: