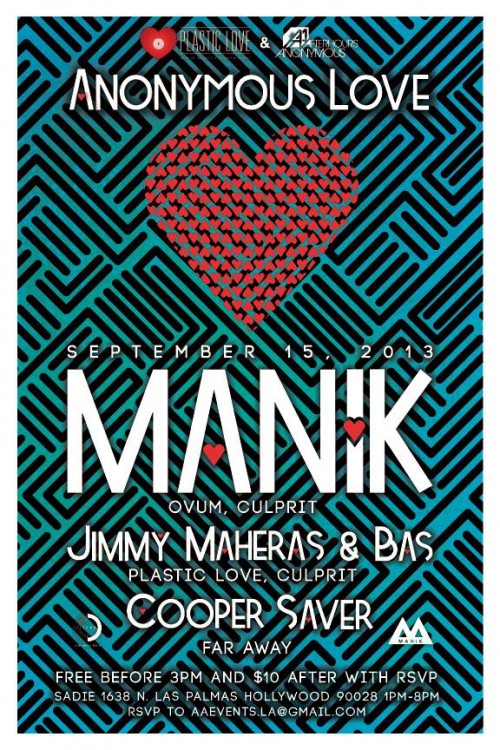 In a city as sprawling and musically inclined as Los Angeles, it can sometimes seem daunting to secure your spot in its extensive electronic emporium. The last few years alone have seen an onslaught of new promoters and parties, making it a Weekend Warrior’s wonderland. Bas Elgharib and Jimmy Maheras, the pair who play as Plastic Love, are about to debut an all-new day soirée certain to be a supreme addition to the city’s sovereign circuit. We caught up with the duo to get the scoop on the party’s premiere, their musical influences, a tumultuous trip to Tijuana, moats and more. These two are a riot and definitely know their dance tracks, so read on to see what they had to say.

Hey guys! So tell us, how did this [Plastic] Love affair begin?

B: Jimmy and I met through our girlfriends at the time (now my wife) and from DJing with the Basic crew at King King. After a few gigs together we decided to try our hand at throwing our own parties.

J: I had been booked to play the patio at Giant’s Saturday night at Vanguard about once a month. I’d play start to end, about 5-6 hours. I invited Bas to come play a couple of times, and things just sort of grew from there.

How has Plastic Love evolved since the two of you joined forces in 2010?

B: We’ve gone from booking a few locals and some of our friends in the side room at Avalon in Hollywood to throwing a handful of our own parties around the city, including hosting Âme live (twice, Frank is amazing!), Cosmic Kids, Prince Club and Stacey Pullen to name a few. From there we’ve played a handful of festivals in Mexico, as well as the main room at Avalon alongside Juan MacLean, Matthew Dear, Sasha, Dennis Ferrer, Hector, and Roger Sanchez. We host a monthly party at The Skybar in the summer, and now have teamed up with the Afterhours Anonymous crew from Denver for a Sunday party we’ve aptly titled Anonymous Love. The past couple of years have also seen Jimmy get a few solo productions under his belt.

J: We are much more serious now – whiskey instead of vodka and what not.

Who are some of the artists that were especially formative in your early years of DJing?

B: For me it has to be Sasha & Digweed during their Delta Heavy years. The music they brought to the US coupled with Digweed’s impeccable precise mixing style, Sasha’s penchant for partying, and New York’s Twilo left quite the impression on me.

J: Danny Tenaglia for me. I used to go hear him at Tunnel, and especially at Vinyl/Arc a lot. The music was ridiculous. Erick Morillo, Darshan from Metro Area and Francois K all had great parties in NYC as well. Deep Dish when they were deep were fantastic. Masters At Work, Josh Wink, Carl Craig, Peace Division, Murk, DJ Vibe, Armand Van Helden, Basement Jaxx, Basic Channel…I could go on and on.

Who are some producers you draw inspiration from currently?

J: Besides the ones Bas just mentioned, I’ve been really into what the New York/New Jersey guys like Fred P, Joey Anderson, DJ Qu, Levon Vincent and Anthony Parasole have been doing. Some of the Brits like Boddika and Joy Orbison. Âme, Marcus Worgull and Dixon, of course. Also Omar S, SBTRKT, Caribou/Daphni and Four Tet. Dennis Ferrer’s production as well. That guy just makes bomb after bomb. And Skudge from Sweden.

What were a few of your quintessential Summer 2013 tracks?

J: You can’t see me, but I’m rolling my eyes. I’ve been caning Jimpster – Rollergirl, Kate Simko – Your Love, and Leon Vynehall’s – Sister. MANIK also has a killer EP coming out on Ovum. Oh, and I can’t forget to mention “Thank You For Letting Me Be Myself” from Omar S. I’m also still hammering Bicep’s “Stash.” Apparently we like Bicep.

All right, let’s get to it. You guys are about to launch Anonymous Love on the 15th along with Afterhours Anonymous from Denver. For your first event you’ve booked MANIK, with an impressive follow-up just two weeks later boasting appearances from both Midland and Mano le Tough. What should people expect from an afternoon at Anonymous Love?

B: Our main goal is to bring some fresh sounds into Los Angeles at a new venue. Personally, I feel like we’ve always tried to do something a little different, and I thoroughly enjoy the idea of being able to introduce people to new music. We were the first ones to bring Âme out for the live show, and now we’re the first to bring Midland and Mano Le Tough. So hopefully a series of first timers, as well as digging around LA for some up and coming local talent.

What can you tell us about the venue, Sadie?

B: Sadie was home to the hotly tipped Les Deux nightclub in 2006, survived for a bit before closing, then reopened as a gastropub. We stumbled upon its current incarnation, and instantly fell in love with it, while playing a private party for a friend. The outdoor space was recently renovated and equipped with a new sound system, a fully retractable roof, a new dancefloor, a new bar, new drink offerings (Mezcal for days), some kind of moat thing…proper grotto vibes.

J: Pretty sure there’s no moat. The venue is gorgeous and has some versatility with the way it can be set up, plus some good people working there.  That’s important in an endeavor like this.

What makes a party ‘successful?’ Any events in particular you drew from in the planning of your own?

B: I’ve always been a fan of the Mister Saturday Night parties in New York, and the We Love Space parties in Ibiza. Two completely different ends of the spectrum, each with their own unique take on parties. MSN is all about location, location, location, a strong local presence, and booking some of the most forward thinking DJs around. We Love is all about the lineup and production. It’s a 24-hour party that you just wish would last a few hours more. That has to have been the hottest party in Ibiza this season. If you’ve never been, it is definitely a must. Hitting that proper blend of lineup and vibe is what makes a party go off.

J: I think it’s all about the vibe. We did a party with Stacey Pullen and everyone there was chanting “Detroit” at the end of his set. It was super dope. Moments like that don’t happen often enough.

I remember that! Any exceptionally outrageous stories you can share with us from a time things maybe didn’t come together for a gig quite as expected?

J: One time the promoter was really late in picking us up from the border in Tijuana. Things were especially sketchy that evening. We saw 3 people get arrested in the span of an hour for no clear reason. At some point we were the only people left waiting there. It was definitely a bit nerve-wracking.

Also, I think we’re the only clowns that have brought beer back to the US. We were stopped once, but apparently you’re allowed to bring back 2-3 beers per person. So keep that in mind next time you’re in Mexico and you have leftover beer. And no shame.

What does the future hold for Plastic Love?

B: More parties, more collaborations and trying to bridge the gap between promoters. There’s a lot of us in this city and we really hope we can do some great things. Not sure how much we should tip our hand, but after Midland and Mano Le Tough we’ve basically got something planned every month, including Halloween and New Year’s, as well as parties planned all the way through next year both as Anonymous Love and Plastic Love. We’re also in the midst of getting our own label, Plastic Love Records, off the ground. The first EP is from Jimmy, with remixes from Timothy J. Fairplay and Cottam, and we’ve just about settled the 2nd and 3rd EPs as well.